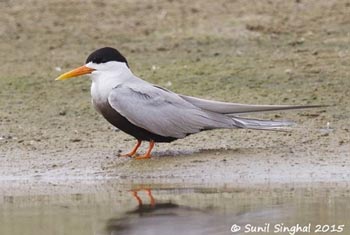 The Black-bellied Tern is found along the major river systems of India, usually breeding on sand spits or a sandy island. An entirely inland species, it is not found on the coast 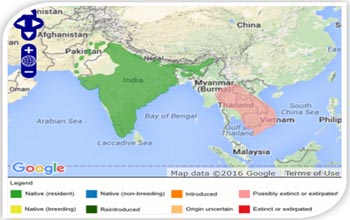 The Black-Bellied tern grows to a length of 32 to 35 cm (13 to 14 inches). Breeding adults have an orange bill, black cap and nape, dark grey breast and a blackish belly and vent. Non-breeding birds show a whitish belly and lack tail streamers and have an orange bill with a dark tip. Its typical habitat consists of lowland rivers and marshes, occasionally smaller pools and ditches, at altitudes of up to 730 m (2,400 ft).

In spite of having long wings, its flight is slow and involves a lot of flapping. It skims over the surface of water and ground to pick up insects and plunges at an angle into the water to feed on crustaceans, tadpoles and fish. Breeding takes place from February to April. It does not nest colonially but may nest with other birds such as river terns (Sterna aurantia), pratincoles (Glareola spp.) and Indian skimmers (Rynchops albicollis) (Gochfeld et al., 2015). It emits a clear piping "peuo".