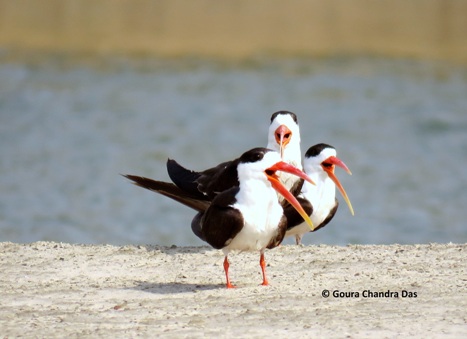 More widespread in winter, the Indian skimmer is found in the coastal estuaries of western and eastern India. It occurs primarily on larger, sandy, lowland rivers, around lakes and adjacent marshes and, in the non-breeding season, in estuaries and coasts. 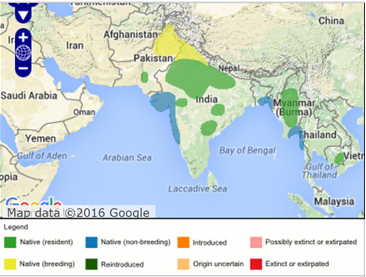 The Indian skimmer grows to a length of 40-43 cm. It has black upper parts, white forehead, collar and lower parts, long, thick, deep orange bill with a yellow tip and longer lower mandible. In flight, it has a white trailing-edge to wing and a short forked tail with blackish central feathers. Non breeders are duller and have browner upper parts. Juveniles have a dusky orange bill with a blackish tip, paler brownish-grey crown and nape with dark mottling and paler, more brownish-grey mantle and whitish to pale buff fringing scapulars and wing coverts.

It breeds colonially on large, exposed sand-bars and islands. Colonies of mating pairs can be observed nesting on sandy islands or open sand banks, often accompanied by other birds like Terns during the breeding season, between February and May. It feeds on surface-dwelling fish, small crustaceans and insect larvae. It emits a nasal kap or kip notes, particularly in flight and when disturbed.