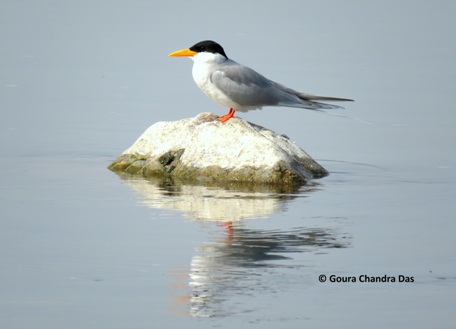 The River tern has a wide range across southern Asia. In India, it is found throughout the country, inhabiting rivers and freshwater lakes, occasionally occurring on estuaries. 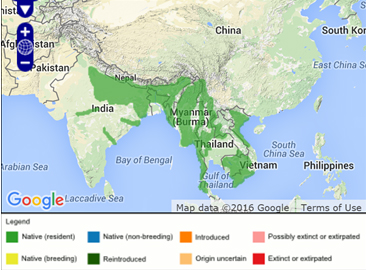 The River tern is a slender bird, about the size of a pigeon, with grey upper parts, black cap on the head, yellow beak, long pointed wings, a deeply-forked tail and short, yellow stubby legs. Both the sexes look alike. During the breeding season, February to May, it has a deep glossy black head and nape. The juveniles do not have the black markings but have grey, speckled upper parts. It is a resident breeder in the region, found along most of the inland rivers, and breeds on sandy islands. It spends a great portion of its time fishing. It predominantly feeds on fish, small crustaceans and insects. More likely to be sighted in flight than on the ground, it has a distinctive slightly jerky flight and flies in circling curves when fishing.