The Indian Sarus Crane occurs in northern and central India, Terai Nepal and Pakistan. Once a common site in the paddy fields of Uttar Pradesh, Bihar, Rajasthan, West Bengal, Gujarat, Madhya Pradesh and Assam; the population of the Indian sarus crane is now on the decline. 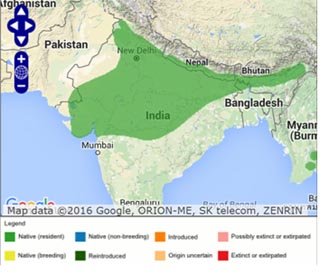 The tallest flying bird in the world, the Sarus Crane stands tall at 152-156 cm with a wingspan of 240 cm. Adults are grey overall, with a whiter mid-neck and tertials, mostly naked red head and upper neck (brighter when breeding), blackish primaries, but mostly grey secondaries, and reddish legs that are bright during breeding and pale outside the breeding season. Juveniles have a feathered buffish head and upper neck and duller plumage with brownish feather fringes. Females are smaller, growing to about 35-40 kg, while the males grow bigger, up to 40-45 kg. A social creature, it is found mostly in pairs or small groups of three or four and is known to mate for life with a single partner (Sundar et al., 2000).

The optimal habitat of the bird includes a combination of small seasonal marshes, floodplains, high altitude wetlands, human-altered ponds, fallow and cultivated lands and paddy fields. It primarily breeds during the monsoon season, however few pairs breed outside this season due to chick loss and creation of nesting habitat due to flooding caused by irrigation canals. Mated pairs of cranes engage in unison calling, which is a loud trumpeting sound. Sarus cranes, like all cranes, are omnivores and feed on aquatic plants such as tubers of sedges (e.g Eleocharis spp.), invertebrates, grains, small vertebrates and insects.