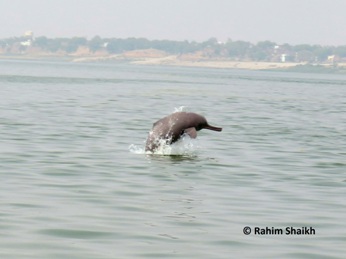 Two subspecies (P. gangetica gangetica and P. g. minor) occur in the Indus, Ganges-Brahmaputra-Meghna and Karnaphuli-Sangu river systems of the South Asian subcontinent, from the deltas upstream till they are blocked by rocky barriers, shallow water, fast currents, dams or barrages (low, gated diversion dams). The three river systems are disjunct and, therefore, have their respective dolphin subpopulations. However, there may be an occasional demographic interaction between the latter two during the high-water season if the freshwater plumes of the two systems meet. There is further subpopulation separation within all three systems, much of it caused by physical barriers constructed within the last 100 years. A long thin snout, rounded belly, stocky body and large flippers are characteristics of the Ganges river dolphin. The species has a slit similar to a blowhole on top of its head, which acts as a nostril. Females are larger than males and give birth once every two to three years to only one calf. The calves have chocolate brown skin at birth, while the adults have grey-brown smooth, hairless skin.

The Ganges river dolphins can only live in freshwater and are essentially blind. They hunt by emitting ultrasonic sounds waves that bounce off of fish and other prey. They are frequently found alone or in small groups; generally, a mother and calf travel together. The dolphin has the peculiarity of swimming on one side so that its flipper trails the muddy bottom. It is understood that this behaviour aids them in finding food. Being a mammal, the Ganges river dolphin cannot breathe in water and must surface every 30-120 seconds. Because of the sound it produces when breathing, the animal is popularly referred to as 'Susu'. Although not well studied, the movement of the Ganges river dolphin follows seasonal patterns. It is observed that animals travel upstream when the water level rises, and from there enter smaller streams.