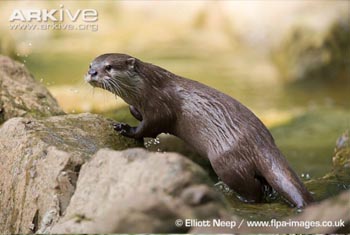 The Asian small-clawed otters occur in freshwater and peat swamp forests, rice fields, lakes, streams, reservoirs, canals, mangrove and along the coast (Sivasothi and Nor, 1994). In the Western Ghats, they are mostly found along the hill streams. They were once common in the mangroves of east Calcutta and Sunderbans. The Asian small-clawed otter has a flattened head and a short, thick neck; eyes are located toward the front of the head. The ears are small and rounded and have a valve-like structure. Nose pads are dusky or pinkish in color. The body is slender, streamlined and serpentine, and is flexible enough to allow grooming of all body. Dark, grayish-brown fur covers most of the dorsal surface with a lighter cream colouration on the ventral surface, especially on the face and neck. The fur has relatively short, fine, dense and velvety hair (less than 2.5 cm).

The Asian small-clawed otters are diurnal animals (active during the day), found in remote areas, free of human disturbance. However, some have adapted to life near villages. They continually groom their fur to maintain its insulating qualities.