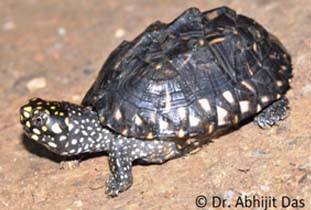 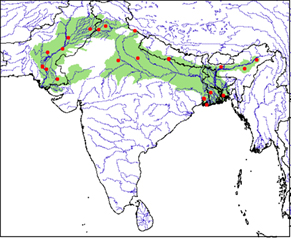 As the name suggests, black spotted turtles are black in color with yellowish streaks or spots and wedge-shaped marks. Their head is black with yellow spots and is extremely large, short-snouted. The neck is greyish and has white spots. The skin at the backside of the forehead of this species is divided into shields. The carapace is convex and is strongly arched with sloping slides. The shell has three prominent and interrupted keels. It is a medium sized turtle with carapace length of 40.5 cm. The females are slightly larger than the males. However, the males have a thicker tail and concave plastra.

The black spotted turtles are freshwater turtles found in lentic water bodies. They are mainly carnivorous and feed on snails and insect larvae, however, vegetative material has also been found in some of the digestive tracts.