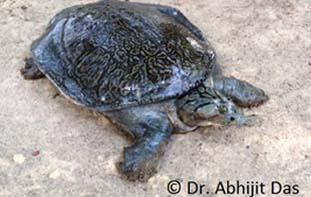 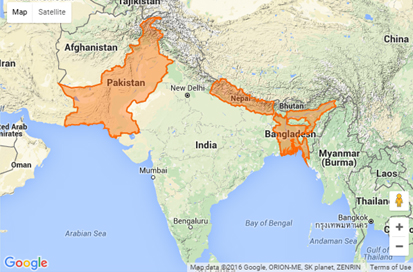 Indian softshell turtle with its prominent, tube-like snout and incredibly flattened shell, is a very peculiar-looking freshwater reptile. These odd features make this turtle so superbly adapted to its riverine habitat, with its long neck and snorkel-like snout allowing it to extend its nose out of the water to breathe, and its compressed shell creating a stream-lined silhouette that makes it a brilliant and fast swimmer (Vitt and Caldwell, 2009). The Indian softshelled turtle has a round to oval, smooth upper shell (carapace), which is olive or green in colour with a yellow border. The limbs are also green, while the shell on the underside of the turtle’s body is grey to cream. It has a broad head, with several black stripes running from the centre towards the sides (Ernst, 1997).