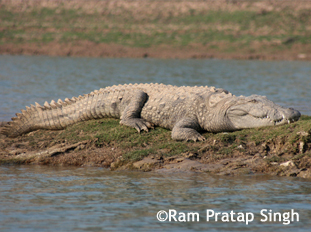 This species is found in India, Sri Lanka, Pakistan, Nepal and possibly, in Bangladesh, its range extends westwards into eastern Iran. The species has become locally extinct over large parts of its range, with viable populations only occurring in Protected Areas (Santiapillai and Silva, 2001). India and Sri Lanka retain the major populations. In India, it is reported to be present in 15 of India's states including much of the Ganga River drainage. Significant populations occur in middle Ganga (Bihar and Jharkand), Chambal River (Rajastan and Madhya Pradesh) and in Gujarat. 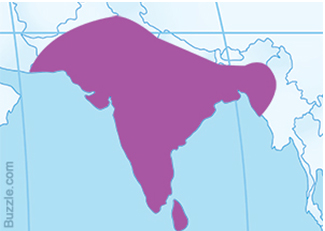 The Mugger crocodile is a medium to large crocodilian species; an adult male may reach up to 4.5 meters (18 ft) in length and weigh 450 kg (1000 lbs). It has a distinctive aspect, and is the most alligator like of all crocodile species. While juvenile’s generally have a light tan colouring with some black cross-banding on the body and tail, adult specimens are generally gray to brown.

The Mugger is a hole-nesting species, with egg-laying taking place during the annual dry season. Females become sexually mature at approximately 1.8-2 m and lay 25-30 eggs (Whitaker and Whitaker, 1989). Nests are located in a wide variety of habitats and females have even been known to nest at the opening of, or inside, their burrow. In captivity, some Muggers are known to lay two clutches in a single year (Whitaker and Whitaker, 1984), but this has not been observed in the wild. Incubation is relatively short, typically lasting 55-75 days (Whitaker, 1987). Muggers are opportunistic predators and use all available resources as food. But considering existing resources, it prefers fish. Juveniles take crustaceans, insects and small fish generally. Adult muggers eat fish, amphibians, reptiles (mainly snakes and possibly turtles), birds and mammals (e.g monkeys). Large adults have been known to take deer and buffalo on occasions.