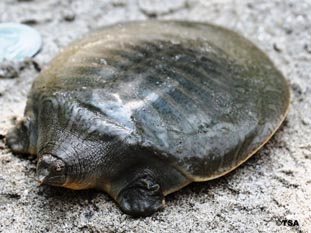 The Indian narrow-headed softshell turtle is widespread in South Asia and can be found in the Indus, Ganga, Godavari, Coleroon, Mahanadi and Padma rivers in the Indian subcontinent. Its distribution in India is localized and patchy but extensive, which is possibly the result of its highly specialized requirement for habitat. With few published records from the Brahmaputra drainage, some recent guides have also listed this species from Brahmaputra and its tributaries. It has also been recorded from states of West Bengal, Shillong, Meghalaya and Goa. Presence in West Bengal bridges the distributional gap between eastern and western records of the Ganga River. Chitra indica’s shell is widely oval and flattened. The species has a short fleshy proboscis. The skull is long and narrow while the nostrils and orbit are situated close to the tip. The carapace is dull olive or bluish-gray in color and has a complicated pattern of wavy reticulations. The neck and the outer surfaces of the forelimbs are also similarly coloured. From the nape of the neck to the anterior part of the carapace a “V” shaped marking is present. The juveniles have several black elongated markings on the carapace. They have cream or pale pink plastron. In comparison to the females, the adult males have comparatively longer tails and thicker bases. Optimal habitat is moderate to large rivers with low turbidity and sandy bottoms.

It breeds during the monsoon in central India alone and during the dry seasons in rest of its distribution. At a time, female can lay about 65-193 eggs. It is believed to be an ambush feeder and spend most of its time concealed below the sand, with only the tip of the snout exposed.