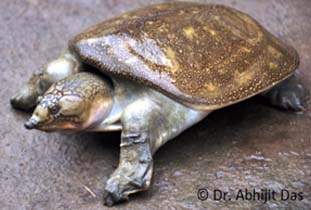 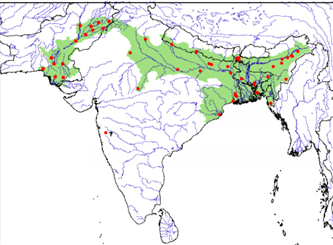 This species is confined to India, Bangladesh and Pakistan. It is widespread in the northern and central parts of the Indian subcontinent.

The Indian peacock softshell turtle has a large head, downturned snout with low and oval carapace of dark olive green to nearly black, sometimes with a yellow rim. The head and limbs are olive green; the forehead has dark reticulations and large yellow or orange patches or spots, especially behind the eyes and across the snout, that are larger than those in its sister species. Males possess relatively longer and thicker tails than females, with the cloaca situated close to the tail-tip.