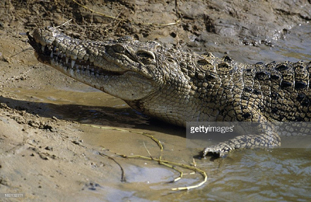 Apart from the eastern coast of India, the saltwater crocodile is extremely rare on the Indian subcontinent (de Vos, 1984). The saltwater crocodile is also found in Bangladesh. A large population is present within the Bhitarkanika Wildlife Sanctuary of Odisha while smaller populations occur throughout the Sundarbans. Populations are also present within the mangrove forests and other coastal areas of the Andaman and Nicobar Islands in India. Saltwater crocodiles were once present throughout most of the island of Sri Lanka. 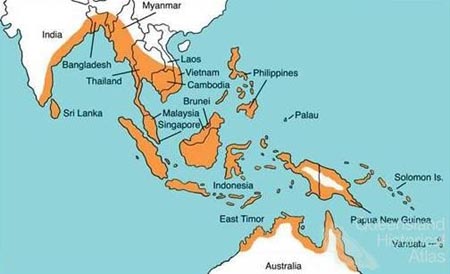 The saltwater crocodile is the largest of all crocodilians, and the largest reptile in the world. The species has a relatively large head, with a pair of ridges that run from the eye along the centre of the snout. Adults are generally dark in colour, with lighter tan or grey areas, and dark bands and stripes on the lower flanks. The underside is creamy yellow to white, becoming greyer along the tail. The juvenile is usually pale tan, with black stripes and spots on the body and tail, which gradually fade with age, although never disappear entirely. Female saltwater crocodiles are smaller in size than their male counterparts, normally reaching a maximum length of 2.5 to 3 m. With its long, powerful tail, webbed hind feet, and long, powerful jaws, the saltwater crocodile is a superbly adapted aquatic predator. As in all crocodilians, the eyes, ears and nostrils are located on top of the head, allowing the crocodile to remain almost totally submerged when lying in water, helping to conceal it from potential prey, while a special valve at the back of the throat allows the mouth to be opened underwater without water entering the throat. The saltwater crocodile is considered to be more aquatic than most crocodilians, and is less heavily armored along the back and neck. Saltwater crocodiles have a variety of prey. Juveniles are restricted to small insects, amphibians, reptiles, crustaceans, and small fish. Adults feed on crabs, turtles, snakes, birds, buffalo, wild boar, and monkeys. Saltwater crocodiles hide in the water exposing only their eyes and nose. They lunge at prey, often killing it with a single snap of the jaws, then drag the prey under water where it is more easily consumed.