About us - Phase II

The Ganga River is intricately connected with a network of tributaries and the floodplain wetlands. Together, these tributaries along with enhancing the flow of the Ganga also serve as breeding grounds and refuge for aquatic species. However, they also drain pollutants into the River, severely affecting aquatic fauna and their habitat, hampering the conservation process. Initial efforts made through the implementation of the Phase I of the “Biodiversity Conservation and Ganga Rejuvenation” project emphasised urgent need for accounting basin scale natural and anthropogenic processes, and upscaling the present work to basin level to ensure sustainable and effective Ganga conservation actions. Further, it was realized that a centralised repository of basin-scale information and laboratory infrastructures are needed to ensure effective implementation of the project and decision support to NMCG.

In view of this, the second phase of the project aims to intensify the conservation efforts in identified sites along the mainstem Ganga River and up-scale the conservation effort at  basin level to ensure sustainability of the river conservation efforts. Apart from the mainstem Ganga River, the project is proposed to be carried out in the major north and south bank tributaries and the wetlands along the basin. Thus, Ramganga, Gomti, Ghaghara, Gandak, Kosi rivers, the north bank tributaries and Yamuna and Son, the south bank tributaries have been selected. Along with these tributaries the Chambal River will also be studied, since it homes a significant population of the critically endangered gharial, Endangered Gangetic dolphin and several species of birds, thereby contributing to the aquatic diversity of the Ganga basin. The project will also bring the conservation priority areas, assessed during Phase I, under protection within the purview of the Wild Life (Protection) Act, 1972 and the Environment (Protection) Act, 1986. The Phase II of the project has initiated a systematic conservation planning of the Ganga River at the basin scale, incorporating cross-disciplinary coordination of water, land and related sectors through a structured framework. 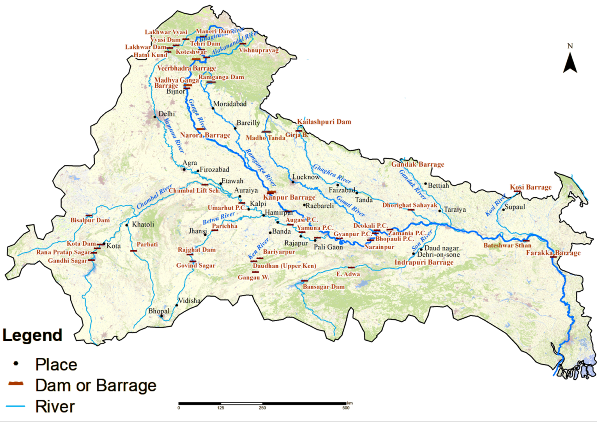