Prof. S. P. Singh, Former Vice Chancellor, HNB Garhwal University and Senior Scientist, INSA delivered a talk on “Himalaya in relation to climate change” at WII on 2October 2015. In his talk, Dr. Singh highlighted the various issues related to the Himalayan cities/towns such as depleting water resources, phenological disturbances, concentration of black carbon in the Himalaya, and benefits of clean cooking in the mountains. He also highlighted the issues of climate change issue reminding the audience on the disasters in the Himalaya especially in recent past. He also discussed the effect of climate change on agriculture in the mountains, relation of snow melt with floral growth and seed desiccation, glacial shrinkages, relation of glacial melt to river water volume and he specifically mentioned the benefits of studying vegetation ecology to assess the impacts of climate change., He empahsized the need for setting up of long-term ecological monitoring stations along the altitudinal gradient of Tunganath-Chopta area in Kedarnath Wildlife Sanctuary. Following his talk, there was lively interaction by the researchers and students with Prof. Singh.

The Research Team of the DST--NMSHE Project had a formal meeting with Dr. S. P. Singh in presence of Dr. V. B. Mathur, Director WII, and faculty members Dr. G. S.  Rawat 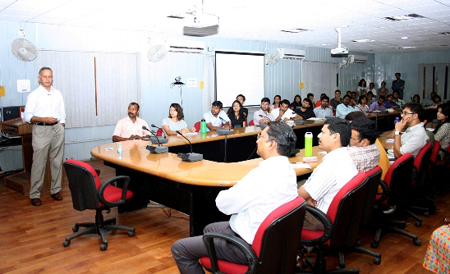 and Dr. S. Sathyakumar. It was an introduction of the Team-NMSHE to Dr. S. P. Singh is now affiliated to the institute as a Senior Scientist of Indian National Science Academy (INSA). Since he has experience spanning more than 40 years in Himalaya as an academician, this meeting gave the Team-NMSHE an opportunity to get valuable learnings from his vast experience and expertise.

Dr. Singh provided a wide range of inputs to the NMSHE project while recommending studies on moisture sensitivity of seeds, seed dispersal abilities, variation in forest types and other such ecological observations along altitudinal gradients in relation to climatic variables to assess the climate change effects on different microhabitats in the Himalaya. He also encouraged the Scientists and Researchers to publish the efforts of WII in putting together a multi-disciplinary team to study the climate change impacts on Himalayan ecosystem and to contribute towards Indian negotiations in the global climate change dialogues.

There are two main approaches in climate change research: field observations, obtained over a period of time and space and small scale experiments. Although field observations are always better at measuring biotic responses to climate change, but it requires long time span to achieve results. Artificial warming experiments remain one of the chief methodologies used in global climate change research (Shen and Harte, 2000). Nevertheless results of such experiments may be highly uncertain and greatly underestimate ecosystem responses to global warming (Sun et al. 2013).

In the high altitude of Himalaya where precipitation in the form of snow is a regulatory factor on the community structure and function, changes in snowfall and melting patterns highly affects soil microbial functions through change in moisture regimes. Timing of occurrences of various plant (phenology) and faunal communities (e.g. insect emergence) after dormancy period is also regulated by the seasonal changes in the temperature and precipitation. Many field studies have been conducted on the potential effects of global warming on the growth and community structure of vegetation, soil bacterial and invertebrate community performances in various polar/alpine ecosystems across the world. By contrast, equivalent experimental studies in the Himalayan region are much sparser and comparative studies across sites are missing completely. Since soil microflora are the backbone of the nutrient cycling systems in any ecosystems especially in the high elevation areas where activities are limited to few months, any change in their growth or community structure caused by climate change will affect the local ecosystem.

In order to simulate the warming effects on subalpine and alpine ecosystems, six passive open top chambers (OTCs) equipped with soil and air temperature probes for continuous microclimatic measurements were installed in the high altitude areas of the Gangotri National Park. This technique is standardized in design and forms part of a broader geographical network of sites (e.g. The International Tundra Experiment, ITEX), which allows for a comparison of responses on a circumpolar scale. The experimental site is located inside the Gangotri National Park. The sites are at 3500 and 4000m asl in the subalpine and alpine herbaceous meadows. The vegetation in the experimental plots is dominated by herbs and graminoids with good lichen cover on the soil surface. On October 2016, 6 Open Top Chamber (OTCs) were installed at Chirbasa (2) and Bhojbasa (4). The OTC was designed as a hexagonal chamber with a bottom diameter of 170 cm, top diameter of 110 cm and height of 80 cm. The base area of each OTC was 2.6 m2. The chambers had inwardly inclined sides, which improved transmittance of solar radiation and helped to trap heat. The chambers were constructed of Polycarbonate sheets (5 mm thick) and the material had high solar transmittance (85%) in visible wavelengths. 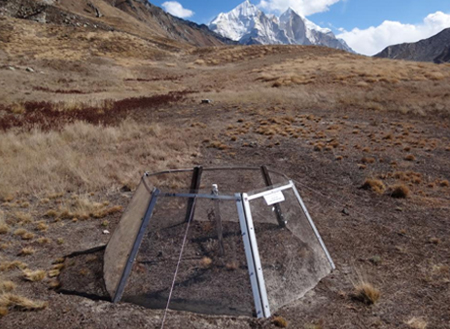 Objectives of the study