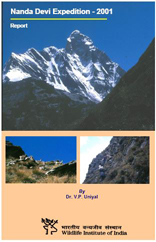 Nanda Devi National Park is located within the high mountainous ranges of Garhwal Himalayas in the upper catchment of the river Alakananda, the eastern tributary of the river Ganga. The Nanda Devi is the second highest peak (7, 817m) in India and considered the world’s second toughest peak to climb. Nanda Devi is one of the important site of wilderness and hot spot of biodiversity in the Himalayan region. The importance of this area came under fame when the entire basin was declared as sanctuary in 1939.

Further, in January 1988 the area was notified as the second Biosphere Reserve of India and designated as the Nanda Devi Biosphere Reserve (NDBR). The NDBR was the second such reserve in India to be established under the Man and Biosphere Programme (MAB) launched by the UNESCO in 1970. Realising the importance of its biological diversity and occurrence of several rare and endangered floral and faunal species the NDBR was listed as World Heritage Site in December 1988.

The Garhwal Rifles Regiment Centre, Lansdowne conducted the expedition in Nanda Devi from 26 August to 14 September, 2001 and named this expedition as Clean Nanda Devi Expedition 2001.